There are two bartenders in the Legend of the Red Dragon. One is in the Inn, and the other is found in the DCT.

This is "the guy" in town. He knows the scoop on Seth the Bard, so you can ask him, if you're unfamiliar with the bard's purpose.

The Inn bartender holds the keys you need to break in and kill other players. You need to pay him 1600gp/level to get those keys. You can't bribe him if you're level 1. If you leave without attacking another player, he will give you back half of the gold you gave him. (The other half is for wasting his time.) You will not be able to attack another player that is more than one level below you.

Pay him 2 gems a pop and get a magical elixir that boosts your HP, Strength, or Vitality by one point.

Pay the man 500 gp/level to change your name. He'll let you say no as often as you want before you get it the way you want. There are certain names you are not allowed to change to (or choose at the start of a round) such as "Barak", "Turgon", "Dragon", or "Chance." 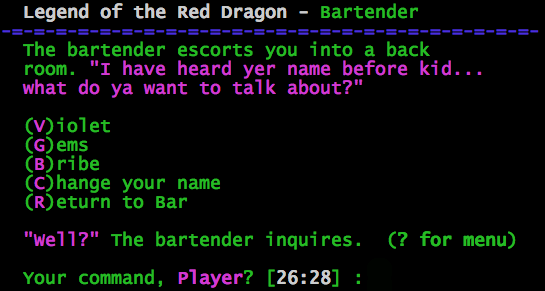 Chance works out at the elusive Dark Cloak Tavern.

Visiting Chance at the DCT is the only place in the game where you can switch your class, among Mage, Thief and Death Knight. This is why having a horse is so useful, especially if you are a mystical user. You can catch a fairy, switch class to Thief, rob the bank, then switch back to Mystical.

The only other way to change your class is to fully master the one you're in. Amassing 40 points of any skill usually takes most of the game, if you're using your strategy right.

If you bribe him with 2 gems, he'll give you the following on any one player in your realm:

Community content is available under CC-BY-SA unless otherwise noted.